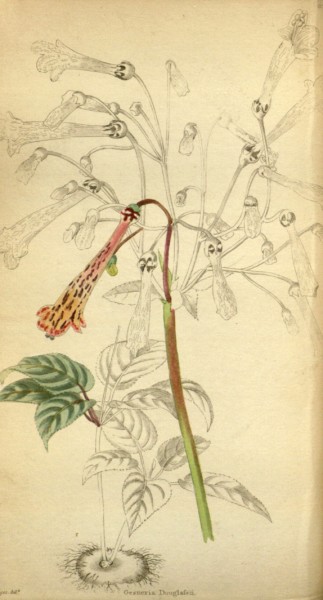 Loddiges published The Botanical Cabinet from 1817 to 1833, and early editions had some highlights — including the first publication of Sinningia speciosa. By 1833 it appeared that the publication was foundering, and the hand colouring was limited to representative parts of the print.

You can see the engraving itself, the black and white portion, with the colouring limited to small portions of the flowers and leaves.

Aside from the limited colour, this print is interesting for several reasons. Note the perspective — the flowers are in the foreground, with the leaves in the background, an effect not unlike taking a photograph of the flowers from fairly close up, leaving the rest of the plant appearing much smaller. As well, the tuber is shown at the surface of the medium, with roots growing from it into the soil — much as would happen in real life.