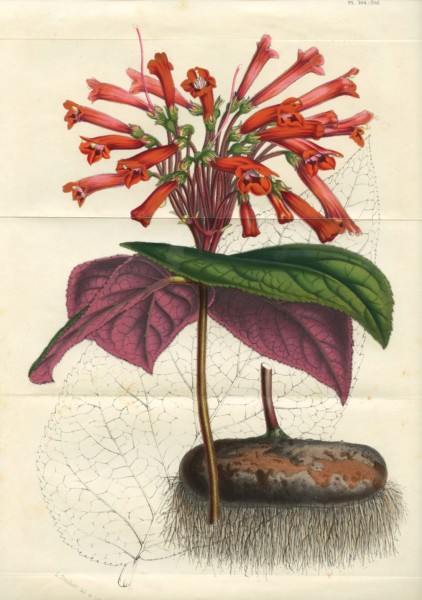 Van Houtte’s Flore des serres et jardins de l’Europe had a long and venerable run as one of the most prominent horticultural/botanical publications of its day. While many of its illustrations were copied from other journals, such as Curtis’s Botanical Magazine, in this instance the image and text were the first publication anywhere of the species.

It’s a splendid print, and an extra large size that didn’t fully fit in the scanner, hence the truncation of the publisher logo at the bottom.

The image is particularly notable for its accurate representation of the tuber. It’s clearly intended to represent the tuber as being partly above-ground, with many small fibrous roots emerging from the lower parts of the tuber into the soil. Many species of what we now know as Sinningia have partly or mostly above-ground tubers, which can get very large and are often a significant part of the attractiveness of the plant.