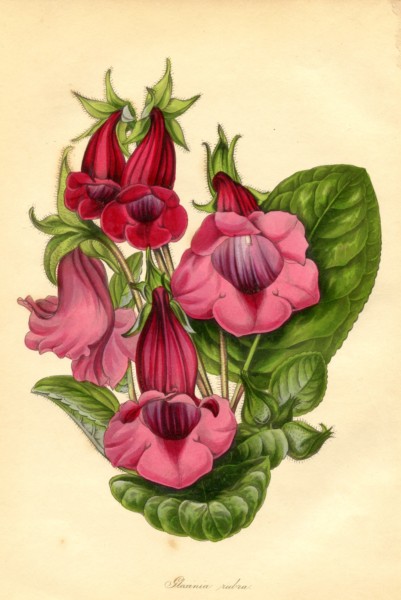 This is an important print – it’s the first illustration of the red form of Sinningia speciosa, which is the source of the highly saturated red color in many modern “Florist Gloxinias”. Note the difference in color between the newly opened buds at the back and the more mature flowers in the foreground. Paxton makes it clear in the text associated with this image that it is an accurate representation. Early flowers are a deep. saturated red with an almost brownish color in the throat. As the flowers mature, they fade to lighter red. Another print from the same year can be seen here, although it’s possible that the G. rubra flowers included in it are copied in part from this print.

There is an interesting (and amusing) back story to the distribution of this cultivar. It was discovered in Brazil by W. D. Brackenridge in 1838, as a single plant, a sport, within a large colony of what Brackenridge understood as Gloxinia caulescens. Recognizing its potential in horticulture, he collected it and sent it to a nurseryman friend in Philadelphia, who propagated it and sold the stock to another nurseryman in England, at a healthy profit.

Things got complicated, leaves had been stolen, other nurserymen got the stock, lawsuits ensued, and so on. The complete story (a facsimile of an article by Mr. Brackenridge) can be seen here.

It’s interesting to see the intensity and competitiveness with which new botanical discoveries were greeted in the 19th Century.