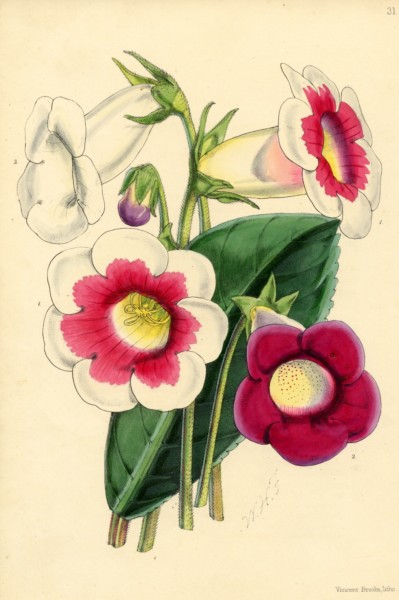 Published as Gloxinia speciosa varieties, these are early hybrids of what we know now as Sinningia speciosa.  Note that the two red and white flowers are almost fully peloric (multiple lobes without the typical two on top and three on the bottom pattern of the species), although the flower to upper right has the upper lobe partly divided. While the text suggests they are upright, they are not full so. Modern peloric hybrids are more nearly vertical.  This suggests that these are very early peloric forms.  A typical modern hybrid can be seen here, and other early hybrids here.

The other two varieties are noted as being of the “drooping-flowered division”, meaning they have the slipper shape of the wild cultivars, with two upper and three lower lobes.