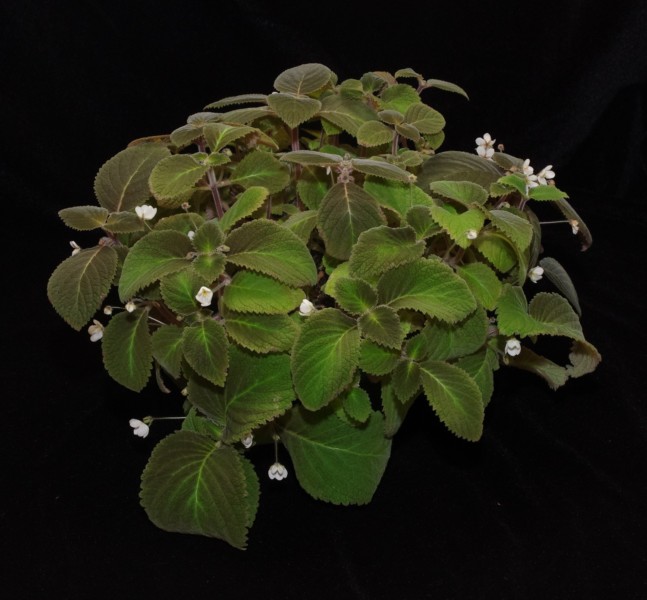 In the spring of 2006 Ron Myhr went in search of a previously reported but uncollected Phinaea species, and was able to locate the originally-described species in Blue Hole National Park, Belize. This collection, along with a number of previously described Phinaea species, is now understood as being an Amalophyllon, quite possibly A. rupestre. If identified as such on labels, etc., it should also show the collection number, RM2006, as it may yet be found to be a new species.

The plants were found in a number of places in the general vicinity of St. Hermann’s cave, which is within Blue Hole National Park, but some distance from the deep pond known as the Blue Hole. Plants were found at the immediate cave mouth, as well as along forest trails. All were found growing in thin layers of moss and humus on limestone rock, often on vertical surfaces. Other plants in the vicinity included begonias.

None of the plants were in bloom, although several seed pods were collected, along with some rhizomes and a few cuttings — all with the permission of the Belize government and the park managers. None of the cuttings survived transportation, but rhizomes and seeds sprouted readily and the plant is in wide distribution. Of particular interest is the degree of variation in leaf color and patterns.

The plant shown above was exhibited at the 2015 convention of the Gesneriad Society.

Additional photos of plants can be seen in the photos linked below.  Clicking one of the links initiates a slideshow, starting with the link clicked.  The slideshow can be paused for closer examination of individual photos.

In cultivation the plants grow vigorously and are easy to bloom, apparently tolerant of quite a wide range of conditions. Some growers report that the flowers have a distinctive citrus scent, although not all are able to catch the fragrance.