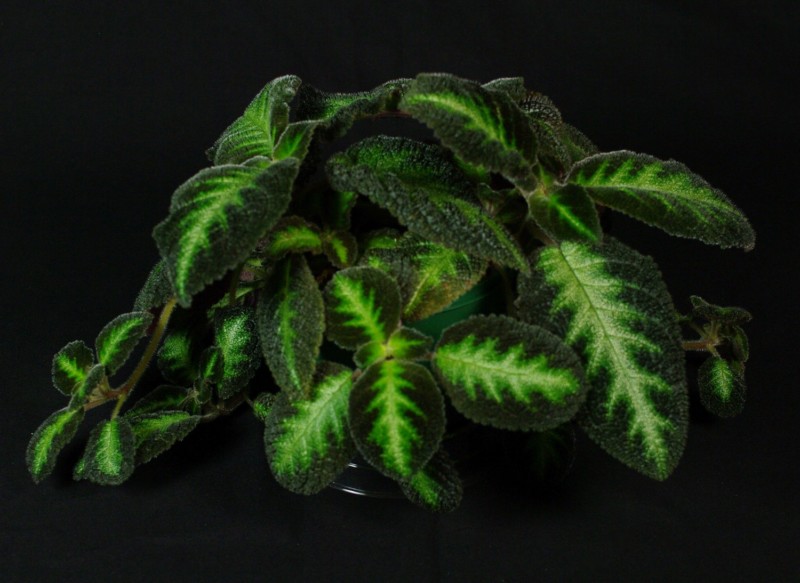 Episcia lilacina is one of the few species in the genus that does not have red or reddish orange flowers. Its lavender flowers range from a fairly rich tone to almost white, but always form a lovely contrast to the dark foliage. The photograph above was exhibited at the 2010 convention of the Gesneriad Society.

The species is variable, with many named cultivars. The Gesneriad Register for Episcia and Alsobia (2009) contains 27 separate listings for the species, over two and a half pages. Leaf colors range from more or less plain mid green through dark shades and a variety of dramatic light/dark patterns.

Unfortunately, many of the forms of the species seem no longer to be in cultivation. By far the most likely to be commercially available, and to be seen in shows, is E. lilacina ‘Blue Nile’. It was the product of a mid-1970s cross between E. lilacina ‘Viridis’ (bright green leaves with silver spots along the midrib, lavender and white flowers with a yellow throat) and E. lilacina var. lilacina (leaves dark green with a lighter herringbone pattern around the midrib, lavender flowers).

An antique print dating from the late 19th Century reflects the variance in the foliage patterns on this species.

A number of other pictures of the species can be seen in a slideshow by clicking one of the links below. The slideshow will start with the image clicked.