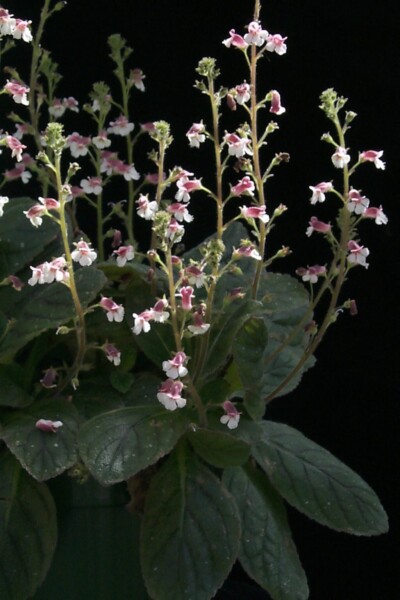 Gloxinia erinoides is a lovely small species, characterized by a fairly flat set of leaves and tall inflorescences, each with many pretty small flowers. The overall effect can be quite dramatic and attractive, as seen above. It is distributed naturally in northern South America, primarily the Andes, and north into Central America as far as Costa Rica.

These plants are sometimes grown in terrariums as they benefit from elevated humidity, but can also do well on open shelves under artificial lights or in a shaded greenhouse. They are almost always grown “multi-crowned” with resulting multiple inflorescences.

G. erinoides is a variable species. The principal variables are the color of the leaves, ranging from a deep reddish-green to a more standard green tone; the degree of spotting on the leaves, ranging from dramatic evenly distributed large spots to almost no spots at all; and the color of the flowers, which have varying degrees of white and pink/red. A pure white form is reported, but we do not have an illustration of this form.

The forms of the species in cultivation were originally collected from the wild and those we have are illustrated on their own pages, accessible from the genus page. These usually have some detail and additional images. The photo above is the form originally distributed, and has not been given a variety name.  The links below are to other varieties, and will be presented in a slide show when any of the links is selected.