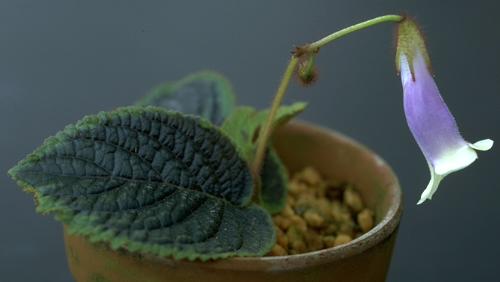 A closeup of the flower shows the elegant form of this interesting species, and the yellow markings in the throat. Mr. Okuto reports that the plant was collected in Yunnan, China, in 1996. It has one or two flowers per peduncle, and blooms on and off during the summer. This species has a calyx tube that isn’t divided to the base (as is clear from this photo) and a relatively thin leaf.

There is another cultivar distributed as H. speciosa, with large leaves speckled with a different color. Mr. Okuto believes that the two forms (the one shown here, and the large-leaf) will ultimately prove to be separate species, as even the flower is quite distinctly different.