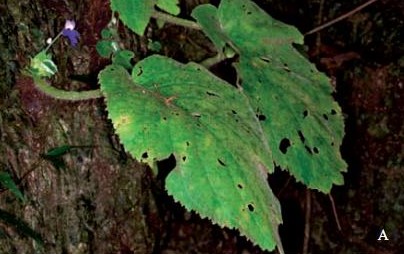 Petrocosmea bicolor is listed as vulnerable due to its very restricted range. It is found in a highly managed area. Collection by local staff and tourists is a potential threat and due to its narrow range this could drive this species to a higher threat category very quickly.

Only known from quite a large population at Doi Ang Khang, Fang District, Chiang Mai province, Thailand. It is quite common within the single locality. Both the area of occupancy and the extent of occurrence are estimated to be less than 10 km². Occurs at an altitude between 1,400 and 1,500 m.

This is the only species in Petrocosmea with a strongly bicolourous corolla with the upper lip much paler than the lower. It is otherwise rather similar to Petrocosmea heterophylla and Petrocosmea grandifolia, both of which have larger white ﬂowers. No evidence that bulbils have previously been recorded in the genus.

A close up of the flowers can be seen here.