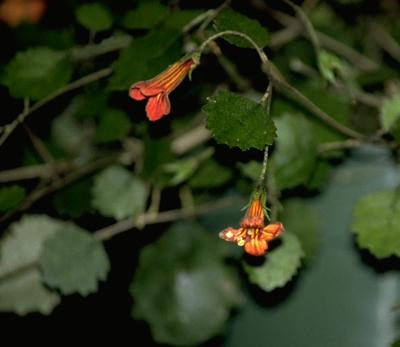 Rhabdothamnus solandri is the only member of the genus Rhabdothamnus, and the only plant from the Gesneriaceae family native to New Zealand. The common names for the plant are New Zealand gloxinia, and in Māori language: taurepo, matata and waiuatua.

R. solandri is a small shrub growing to 2 metres. It is only found in the North Island in a variety of locations such as forests, near streams, or on banks. R. solandri has a distinctive red and yellow trumpet shaped flower.

Due to “extinction debt”, the future extinction of this shrub is nearly guaranteed. The local extinction of several species of pollinating birds by 1870 has caused a long-term reduction in the reproduction of the shrub species, which requires these birds to produce seeds. However, as the plant is slow-growing and long-lived, its populations persist.