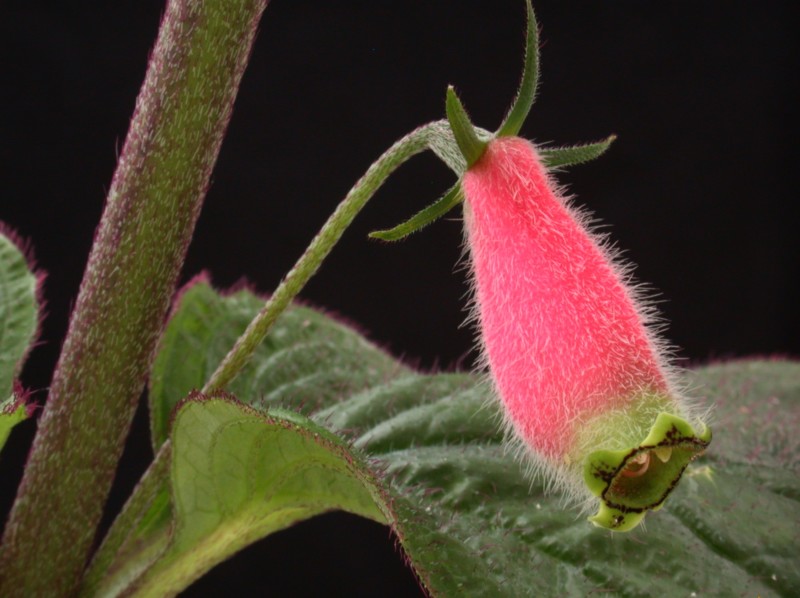 Seemannia purpurascens is a striking species, in all its forms — some of which may in fact be properly understood as separate species or as genetically distinct varieties or subspecies.

There are at least two quite different forms, both grown and sometimes shown in flower shows under the same name. The form with the green limb, illustrated above as the featured photo, is most widely seen and has significant variability, dependent on where the species was collected.  A form with a dark purple limb is also in cultivation, but is not nearly as widely grown as the green-limbed variety. There are variations on the purple-limbed variety, suggesting seed-grown variability and a possible hybrid origin for this form of the species.

In addition to variability in flower color (red to pinkish corolla tube, green or purple limb) and form (fairly straight or slightly pouched), there is variation in leaf tone. Some collections of the species have darker leaves ornamented with red hairs, and crosses have been made between the darker-leaved variety and the base (green-limbed) species in order to get the best of both forms.

There is general agreement that this group needs to be systematically sorted out, and genetic studies are planned. Results of these studies should clarify the taxonomic status of the various forms.

Photos illustrating the various forms can be seen in a slideshow by clicking one of the links below: