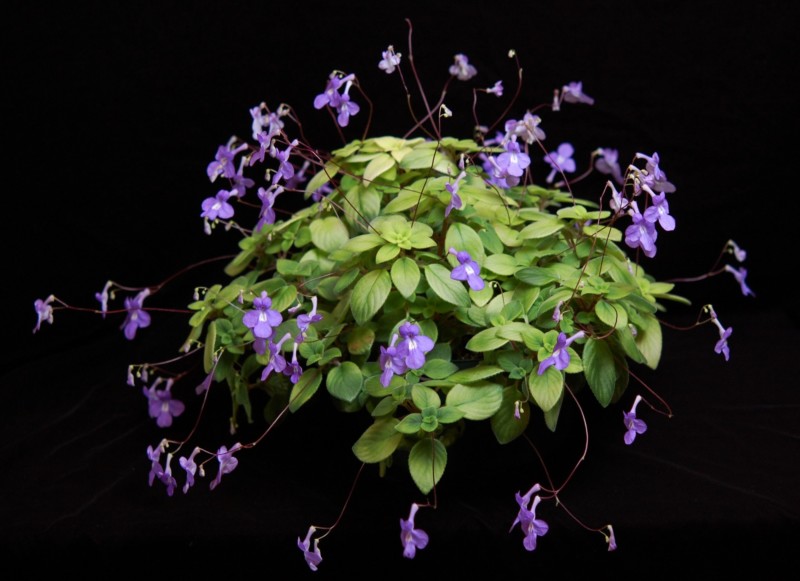 Exhibited at the 2005 convention of the Gesneriad Society.

In Kartuz Greenhouses’ 1983 catalog there was a listing for Streptocarpus ‘Blueberry Cream’, a subg. Streptocarpella  plant described as “Small succulent cream, yellow and soft green variegated leaves. Clusters of blue flowers held well above foliage” (from the Streptocarpus Register). Over the years a variety of variegated Streptocarpella cultivars have been exhibited, most often under the incorrect name “Blueberries and Cream”, or variants such as “Blueberries ‘n Cream”. This name is properly applied only to a standard acaulescent Streptocarpus hybrid introduced in 1989.

Patrick Worley, the creator of the hybrid listed in the Kartuz catalog, has confirmed that the hybrid should properly have been ‘Blueberry Creme’, not “Cream”, a convention he used for several of his hybrids. Documentation has been submitted to the Gesneriad Register to this effect.

As noted, a variety of cultivars have been exhibited under the names ‘Blueberries and Cream’ or similar names. Some of these are clearly the proper ‘Blueberry Creme’, but others are apparently other variegated forms of S. saxorum, and best identified as such.