Achimenes is an herbaceous genus of about 25 species, distributed from Mexico south through Central America. A. erecta is also known from parts of the Caribbean and Colombia, and A. pedunculata from Ecuador. The genus is a member of the sub-tribe Gloxiniinae within the tribe Gesnerieae.

The members of the genus are typically found in tropical forests with alternating wet and dry seasons, frequently on mossy rocks or adjacent to streams. Most Achimenes are adapted to seasonal drought, and like other members of the sub-tribe have “scaly rhizomes”, underground structures adapted from stems and leaves. Each scaly rhizome (in Achimenes, from 1 to 3 cm long) is made up of a central stem with modified leaves (the “scales”) packed around the stem. The upper stems and leaves of the plant will die back during drought, with sprouts from the rhizomes emerging once rains return. The presence of rhizomes extending out from the plant can lead to substantial colonies. They also provide an easy mechanism for propagation and distribution in cultivation.

Achimenes has long been in cultivation on account of its beautiful flowers and ease of culture/propagation. The plant habit is variable, with some species stiffly upright, and others trailing and clambering. Flower appearance also varies widely. One consequence is that the genus has been fraught with taxonomic problems as collectors and horticulturists applied different genus names to the various divergent species. The name Achimenes was originally applied to what we now know as a species of Columnea but was subsequently conserved for the current group based on a publication by Persoon (1806). Other names once applied to the genus include Cyrilla, Trivirana, Locheria and Scheeria, among others.

The floral diversity in the genus is thought to be an adaptation between the plants and pollinators. Recent genomic studies have focused on understanding this diversity to assess patterns of evolution in the genus. This research has shown that hybridization has occurred naturally, with gene flow between species contributing to morphological change and variety.

In cultivation, hybrids and many species can be successfully grown indoors or in shaded outdoor areas. Propagation is generally through collection of rhizomes. At the end of a growing season the pots are usually dried out and in due course the soil-ball broken apart and the rhizomes collected for replanting. Each original rhizome in a pot will produce many more rhizomes over the course of a growing season. The rhizomes can be left in place, and will sprout in spring, after the application of modest amounts of water. 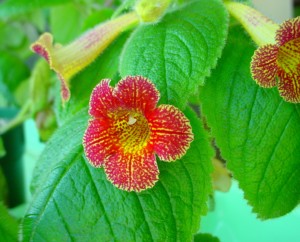