Didymocarpus has been a genus name applied to a wide geographic range of Old World Gesneriaceae, including species now considered to be in genera such as Streptocarpus (Africa) and Henckelia (south and southeast Asia). On the basis of new analyses, including of phylogenetic data, it was substantially restricted to a cluster species from India, Nepal, South China, the Malay Peninsula and Sumatra. There are still over 70 species in the genus.

The species are generally perennial terrestrial or rock-growing herbs, on damp rocks or earth banks, usually in forests but sometimes above the forest line in tropical/alpine conditions, to as much as 3500m.

The genus as currently circumscribed does not include many in active cultivation, although that may be changing. A number have attractive flowers and are of manageable size. Some are being grown as outdoor subjects in tropical or semi-tropical areas of China, and others may be suitable for indoor culture. 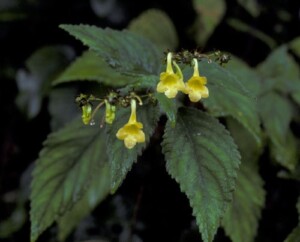