Drymonia is one of the most morphologically variable and largest genera (100+ species) within the neotropical members of the Gesneriaceae; it grows throughout much of tropical America, and the highest diversity is found in the mountain forests of Northern South America. Rain forests at mid-elevation (500-1500 m), on the western slopes of the Tropical Andes harbor the largest number of species of Drymonia.

The species of this variable genus can grow as herbs or shrubs, and can be terrestrial, epiphytes, or climbers. The stems are often square and the pair of leaves of the same node have the same size usually. The largest morphological variation is seen in the flowers, which are often large and attractive, adapted to different modes of pollination (bees and hummingbirds). Fruits are also very variable and colorful, always fleshy but with different ways to open at maturity.

Indoor cultivation is sometimes difficult with the Drymonias, as they can become large and ungainly. However, judicious pruning can result in attractive plants. The leaves are often large and decorative, in some species the upper surface is dark green with light green around the veins (e.g., Drymonia chiribogana), or with white spots (e.g., Drymonia droseroides), and the lower surface is maroon, which make them very attractive for cultivation. Besides the large and beautiful flowers, colorful bracts are sometimes present, which can be persistent and lend a continuing effect of bloom to a plant.

Most of the Drymonias bloom on old wood, so cutting back a plant will not interfere with blooming, and may result in the blooms becoming more visible than would otherwise have been the case. 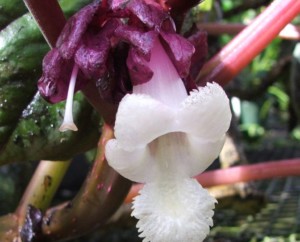