Kohleria is a Neotropical genus of the subtribe Gloxiniinae with around 22 species currently known. Species are distributed throughout the Western Cordillera from Peru to Mexico, as well as in Venezuela, Trinidad and the Guianas. The center of diversity is in Colombia.

The plants occur from warm low to cool high elevation cloud forests.  This range of conditions can be seen in the wide variety of morphologies in the genus.  The plants are tropical herbs, subshrubs, or shrubs with upright or decumbent stems with velvety stems and foliage. The brightly colored (typically red) flowers have spots or markings in contrasting colors on the petals. These plants are rhizomatous, and the species usually have a distinct period of dormancy in their growth cycle.

The genus was systematically revised by Kvist & Skog (1992) and was recognized as having 19 species distributed in Central and South America. Phylogenetic studies by Roalson et al. (2005) indicated that the epiphytic genus Capanea nests within Kohleria, so the two species of Capanea were subsequently transferred to Kohleria.

This genus has a few widely distributed species that require more study to delimit additional endemic species that have been broadly included in the species complex. Kohleria spicata (in particular) is known across most of the distribution for the genus and has morphologically disparate populations.  The species can be found along the roadside in full sun to shady edge habitat.  The genus Pearcea is closely related and shows many of the same morphological traits.  Pearcea may also be capable of hybridizing naturally with Kohleria; genetic and morphological confirmation is still pending.

Kohleria plants were popular in England and Europe in the 19th Century.  This is largely due to the amount of color variation and exotically patterned flowers, as well as general interest in the many tropical flowering plants being introduced from the Americas. Many species and hybrids were lavishly illustrated in horticultural magazines such as Curtis’s Botanical Magazine under the discarded or erroneous names of Achimenes, Gesneria, Isoloma, Sciadocalyx, and Tydaea. A number of antique botanical prints under these names can be seen in the Antique Prints section of the GRW.

These species and hybrids almost entirely disappeared in the early 20th Century, and plant breeders have only recently started to work extensively with this genus again.  This revived interest has introduced hybrids with shorter stems more conducive to growing on light stands and a wide array of colors.

Kohleria is relatively easy to take care of and can be grown either on the sunny windowsill or under artificial light.  A light soil mix of peat moss and perlite kept evenly moist and a position with bright light will produce healthy plants.  Many of the new hybrids are shorter growing, have a short dormancy period or do not go dormant at all and their attractive foliage, hairs and long flowering season make them a desirable house plant.  They also make attractive accent plants in outdoor planters and gardens. The rhizomes can easily be harvested, washed & stored for the next planting. 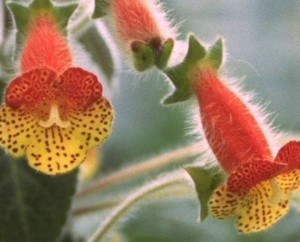