Lembocarpus contains a single species, L. amoenus. The species is distributed along the Caribbean coast of South America, through Surinam and French Guyana and neighboring territories. It grows in montane rain forests often on granitic outcrops.

The single species is a terrestrial, perennial herb with a small hairy subterranean tuber, which itself is of annual duration. Each season a single leaf emerges, with subsequent lavender flowers.

The taxonomy of Lembocarpus is confused, and it was thought originally to be closely allied to Sinningia. Subsequent thinking was that it should be placed in tribe Episciae (now subtribe Columneinae), and then in what is now known as Gloxiniinae (the rhizomatous group). Final disposition is unclear, although the evidence seems to point toward the Columneinae.

A photo of the flower in profile can be seen here, and seed pods here. 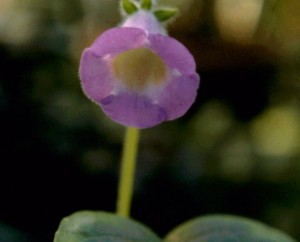