The species in this group have long been known to be closely related and were previously classified as Chirita section Microchirita. They are mostly rather fleshy short-lived or annual plants found in the Western Ghats of India, the foothills of the Himalayas, through continental Southeast Asia to Borneo, Sumatra, and Java. They are all species of limestone rocks. There are approximately 18 species, but the taxonomy of the genus is in need of review.

As currently defined several species are quite variable, including the most commonly grown M. micromusa. Cultivars have yellow flowers and foliage which can be plain green or distinctly marked with red.

It is likely that there are currently some undescribed species with white flowers and possible that some of the yellow-flowered species are insufficiently distinct as to deserve species status. Many species in this genus have an unusual crest-like inflorescence that emerges from the leaf petiole, with the flowers opening sequentially. Several species are known in cultivation including M. lavandulacea, M. micromusa, M. barbata, M. caliginosa, M. hamosa and M. involucrata. 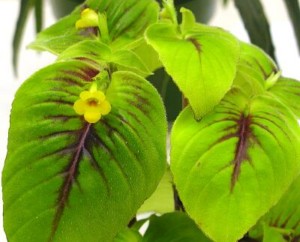