Neomortonia is a genus which formerly contained two very different species. Both are epiphytic or saxicolous herbs with slender, pendent, repent, or scrambling stems up to 1 m long. They grow on damp, shady rocks or epiphytically on trees in lowland or montane forests. The flowers, however, were completely different.

Recent research has confirmed that the two species are in fact not closely related, although neither is closely related to any other known gesneriads.  The former N. nummularia has been assigned to its own genus, Pachycaulos, while N. rosea remains a Neomortonia. 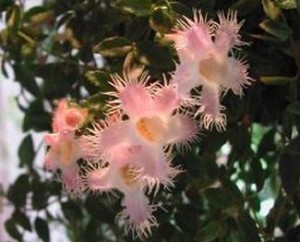