Paraboea are perennial, rosulate or caulescent herbs often woody at the base and sometimes with straggling, woody branches. They are occasionally monocarpic (dying after fruiting). The vegetative parts are usually woolly (at least when young stems).

It is distributed throughout Malesia, from Sumatra to New Guinea and from south China to Borneo, including the Philippines. It usually grows on limestone (rarely quartzitic) rocks in forest or sun-exposed places at altitudes of 100-3200 m.

Botanists have recently studied Paraboea and its relationship to the genera Trisepalum and Phylloboea (Middleton et al, 2011), and found the latter two genera to be nested within Paraboea. This results in a much expanded genus of about 120 species. Additional studies may further amend the understanding of this genus.

Source (in part and adapted): Genera of Gesneriaceae 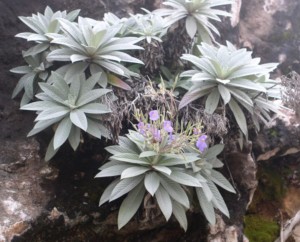