Petrocodon is a diverse and formerly small genus with a limited number of species. Recent genetic analysis reported by Weber et al (2011) have refined our understanding of relationships within a related group of southern Chinese gesneriads, along with some from adjacent countries.  This has resulted in the transfer of several species from multiple other genera into Petrocodon, for a total of around 20 species. The monotypic genera (with a single species each) Calcareoboea, Paralagarosolen, Dolicholoma and Tengia have been transferred into Petrocodon, along with several species from Didymocarpus and Lagarosolen.

The expanded genus is highly diverse, which is uncommon for genera from the “Old World” sub-family. “New World” genera like Sinningia and Columnea have a similar diversity of flower and plant forms.

Few of these species have been in cultivation, with the notable exception of the former Calcareoboea coccinea, now properly Petrocodon coccineus. We have no photos from the expanded genus with the exception of P. coccineus;  you can see a selection of the flowers from taxons now included in Petrocodon by clicking here. That illustration is from Weber et al (2011), “A new definition of the genus Petrocodon (Gesneriaceae)“. 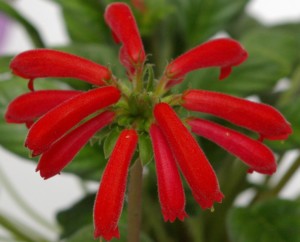