Rhytidophyllum species are mostly shrubs between 1 and 2 m tall. They grow in abundant populations along roads in full sunlight. The stems are stout and erect. The leaves are covered with sticky hairs. Unlike the ephemeral flowers of many Gesneria, the flowers of Rhytidophyllum are usually present and easily seen above tufts of terminally clustered foliage. Species that are lithophytes (= grow on rocks) are smaller (ca., less than 60 cm tall). One of the most easily observed lithophytic species is R. crenulatum that grows in abundant populations on castle walls and throughout old town Havana (La Habana Vieja) in Cuba.

Rhytidophyllum flowers are typically campanulate and maroon to yellow, and rarely red. Flowers of Gesneria are often red (NOTE that there are many exceptions), but recent phylogenetic work strongly supports the presence of four red-flowered species in Rhytidophyllym. this complex of four species (R. earlei, R. lomense, R. onacaense, and R. rupincola) appears superficially like many Gesneria, but their stamens are more characteristic of Rhytidophllum. This complex of four species has trichomes on the filaments that are fused to the base of the corolla (image here). In contrast, all Gesneria have glabrous filaments that are free from the corolla tube (image here). 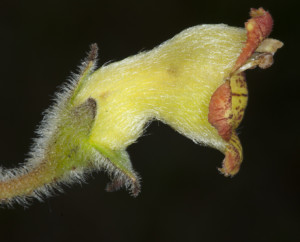