The species and subspecies of plants collectively known as African violets belong to one of the smaller groups in the Old World Gesneriaceae. Wild populations are found chiefly in the area known as the Eastern Arc Mountains of Tanzania and Kenya. The plants grow on moss-covered boulders, on cliffs or on rock outcrops shaded by large trees. While the natural growing area is well within tropical Africa and not far from the equator, most species grow at middle altitudes with cooler temperatures, and some at higher altitudes with seasonally chilly weather.

The natural growing locations of these plants are extremely small in area. Many African violets face extinction due to habitat destruction from farming and logging of the canopy trees. The majority of the species and subspecies are listed as vulnerable, endangered, or critically endangered.

A full discussion of African violets can be found in the article “Saintpaulia: The African Violet” by Jeff Smith. The article describes in detail the recent taxonomic changes of these plants. Something to watch for is that many of the former “species” have been reduced to “subspecies” (abbreviated as ssp.) and plants descended asexually from one individual are often identified as “clones” (abbreviated as cl.).

African Violets mutate readily and hybridization programs over the last 80 years have exploited these mutations to produce thousands of brightly colored cultivars in a variety of sizes and forms. Because most African violets thrive in the same temperature and lighting conditions found in homes, they are one of the most important houseplants in the horticultural industry.

For those with an interest in this fascinating group of beautiful plants, the article will provide a wealth of useful and interesting information. The links below will take you to pages where you can see thumbnail images of the many African violet species and cultivars on the site. Clicking on a thumbnail will take you to a page with a larger image and often text discussing the species or cultivar. We’re sure you’ll enjoy the diversity and beauty of these plants 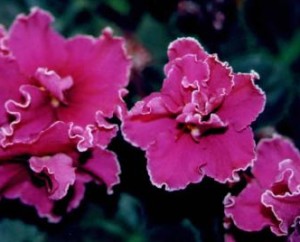