Sinningia is a genus of ~75 species, most of which are native and/or endemic to Brazil. Sinningia is a highly diverse genus in the New World Gesneriaceae, and is thus a genus of many contrasts: species can be erect and tall growing (S. sceptrum, S. mauroana) or very small, stemless rosettes (S. pusilla, S. concinna, S. minima).  Most have tubers, but a few species do not (examples are S. schiffneri and S. barbata).  Almost all species are perennials but one, S. nordestina, appears to be an annual.  Many species live on nearly vertical rock faces, but there are several that are truly terrestrial (S. sellovii, S. allagophylla, S. curtiflora) and a few, such as S. douglasii and S. cooperi are often encountered growing as epiphytes on trees. In addition, S. glazioviana grows on riverbanks, sometimes with its tuber under water.  S. tuberosa and S. helioana actually grow in deep shade inside the mouths of caves on cave walls and while most of the species are pollinated by either insects (bees) or hummingbirds, S. brasiliensis is pollinated by bats and S. tubiflora is visited at night by hawkmoths. In addition, there is also considerable diversity in flower shape, size, and patterning.  Corolla colors can be white, yellow, lavender, dark purple, pink, orange, or red.

Sinningias are popular with plant hobbyists because most are not challenging to grow, many species are long-lived, and the flowers are unusual and attractive. Several species are widely grown outside gesneriad circles and include S. pusilla, S. eumorpha, S. cardinalis and S. leucotricha. In fact, S. leucotricha, sometimes called “Brazilian Edelweiss”, is often seen at cactus and succulent shows (under its old invalid name Rechsteinaria leucotricha), because these folks like its large “caudex”, a structure that is actually a stem tuber in the genus Sinningia.

By far the most familiar member of the genus is Sinningia speciosa, which has been known in the horticultural trade under the common name Florist’s gloxinia or just ‘gloxinia’, for 200 years. This long-lasting error dates back to 1817, when plants of S. speciosa imported in 1815 from Brazil were placed in the genus Gloxinia (a rhizomatous genus in the Gesneriaceae) by Joachim Conrad Loddige. His nursery in the village of Hackney (now a borough of London), was the first to offer the plants for sale. The common name ‘gloxinia’ is still with us, although today it is usually applied to the cultivars of S. speciosa with upright (peloric) flowers, rather than wild forms of the species that have nodding flowers. The peloric cultivars are quite distinct from the wild S. speciosa, although the two types can be crossed to produce fertile progeny. In addition to being peloric, the flowers of these cultivars are also quite large and come in colors (such as dark red) that are not found in species growing in nature. Research is currently underway to understand how the process of domestication changed the wild S. speciosa into the Florist’s gloxinia in less than 200 years.

Additional detailed information on a large number of Sinningia species and hybrids can be found at the Sinningia and Friends website, compiled by Alan Lavergne. 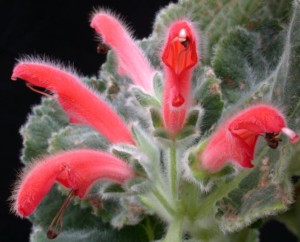