Trichodrymonia is a genus of 40 currently recognized species, with about 10 of these recently recognized after research reported in Mora and Clark 2016 (Molecular Phylogeny of Paradrymonia, Systematic Botany). The genus is widely distributed from southern Mexico through Central America to the Andes and the Amazon basin. Members of the genus grow predominantly in the understory of rain forests on wet slopes, stream banks, or on moist rocks or logs.

While the genus is well supported by DNA analysis, it is also morphologically distinguished from similar genera such as Paradrymonia by the absence of a fimbriate ventral lobe on the corolla and/or strongly anisophyllous leaves, with the smaller leaf usually stipule-like or completely deciduous. 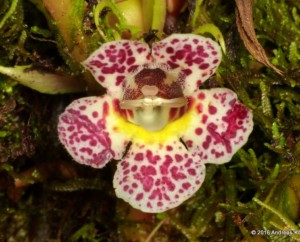