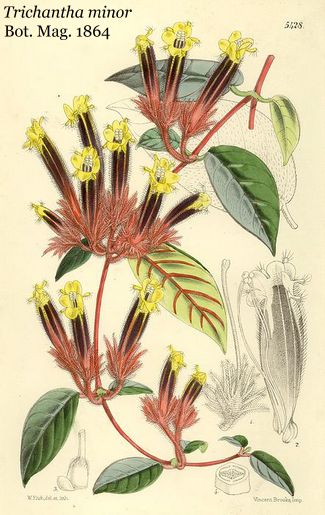 Current taxonomic treatments consider all 300+ species of Columnea a single genus in the subfamily Gesnerioideae and the tribe Episcieae. However, previous treatments have not always agreed. The genus was included in Linnaeus’ famous “Genera of Plants” published in 1753 (where the system of binomials for all biological organisms stems from). In 1844 Hooker described the genus Trichantha but later combined it into Columnea. In 1858, Oersted added Ortholoma and Pentadenia as new genera. Fritsch in 1894 combined all of these genera into Columnea and treated them as sections, rather than different genera. Although rearrangements were made regarding the sectional divisions within Columnea, it largely stayed untouched until Wiehler in 1973 decided to split Columnea into four segregate genera: Dalbergaria, Trichantha, Pentadenia, and Columnea as well as describing a fifth new genus, Bucinellina.

Wiehler’s purpose was to move away from a classification system based entirely on floral form which he believed to be the result of pollinator selection, not evolutionary history. However, the split was controversial and later workers on Columnea did not always follow the system. Morley, Skog, Kvist, and Smith all felt that the separate genera were not merited and that the species were better considered a single genus. Smith did the first molecular phylogenetic work on Columnea. These data did not sample widely from all members of the different sections or genera of Wiehler, but did show that all species could be considered a single genus. Subsequent work by John L. Clark that sampled more widely among the species of Columnea has built on these results. The best indication to date is that all species should be treated as a single genus. The current system recognizes 5 sections within Columnea that largely follow the genera of Wiehler with some species moved to different sections.  The recently described section Angustiflorae was added, since phylogenetic data indicated that what had been considered section Stygnanthe was not monophyletic and needed to be divided.

Preliminary work in my laboratory tried to verify if the different genera of Wiehler, now treated as sections, are each monophyletic (can be traced back to a single origin). Early data indicated that although some sections appear to be traced to a single 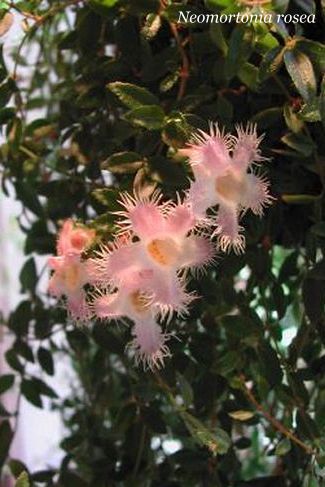 ancestor such as section Columnea, other sections could have multiple origins, such as sections Collandra and Ortholoma. However, recent studies that have sampled more widely found that some of the species thought to belong to section Columnea because of corolla morphology actually represent a separate origin for that particular corolla morphology – implying that none of the sections match the evolutionary history of this genus. It is almost a guarantee that as we continue to sample more species and build on these works,  sectional treatments will change.

Columnea is distinguished from its closest relatives on the basis of its indehiscent berry fruit. Some species may represent a transition from the fleshy dehiscent fruits of its close relatives, since some species of Columnea have fruits that still do seem to dehisce, albeit perhaps tardily (C. trollii).