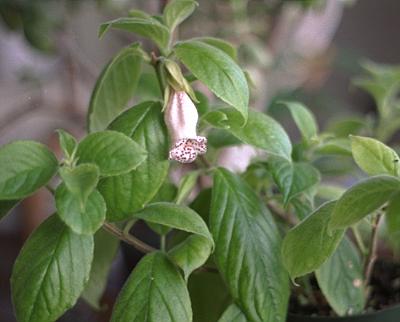 This unusual Nematanthus, collected by Alain Chautems, has an enormous white flower with purple spots. It drips its prodigious nectar onto the leaves below. This species appears to be closely related to Nematanthus albus. Neither name was yet officially published at the time of original posting here, but that has now been done by Dr. Chautems. A closeup of the flower better illustrates the dramatic spotting. A similar unnamed species can be seen here.