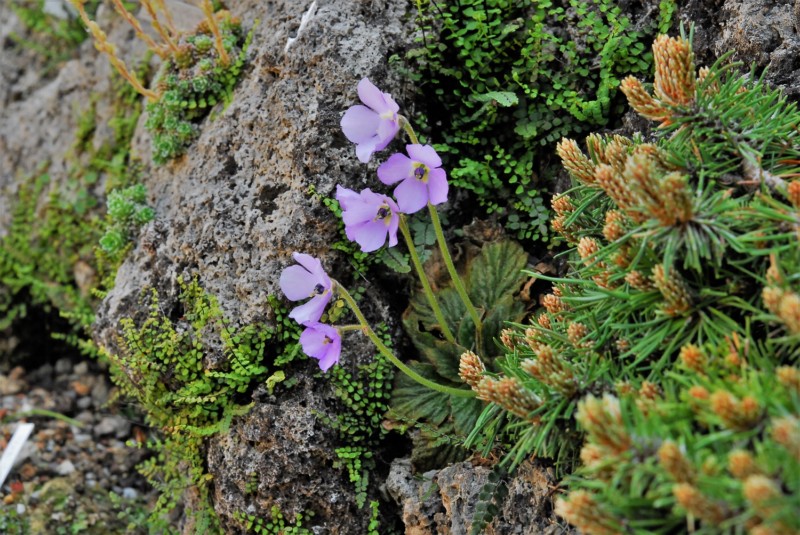 This plant is endemic to the Balkan Peninsula, occurring in Albania, Bulgaria, Greece, FYR Macedonia, Montenegro and Serbia. Throughout the species’ range the populations of Ramonda serbica are fragmented and restricted to canyons, gorges and ravines.

Although all Ramonda species are closely related, R. serbica forms a somewhat flatter rosette of crenelate leaves. The flower is usually five or six-lobed but sometimes fused into four as shown in this early publication of Curtis Botanical Magazine.

This species has a very specific, small and restricted habitat requirement and it belongs to a group of rare resurrection vascular plants in Europe. Ramonda serbica is a perennial herb, which can be found in humid and shady areas and it flowers from mid April until the second half of May. The species occurs in shady crevices of limestone rocks between 400-1,500 m asl (Commission of the European Communities 2009). It usually inhabits north-northwest crevices but is occasionally found in northeast facing crevices. Despite occurring in north facing and wet rock habitats, in almost all localities in the range, particularly at lower altitudes, populations are in anabiosis during the dry summer months and sometimes even in April or May. Some years with an unusually dry April or May the species can be in a completely dry stage (anabiosis) during the flowering period.