Remarks: “myconi” is pre-Linnaean phrase name term: Also published as “Auricula ursi myconi” in Historia generalis plantarum, Jacques Daléchamps 1587 (p. 837).  What does this all mean … the species that we know as Ramonda myconi may be the earliest member of the gesneriad family to have received such serious scientific consideration, most likely as a herb in the 16th century, albiet with another identity.

The genus is named in honour of Louis-Francois Èlisabeth Ramon de Carbonnières (1755-1827), an eminent French physician, botanist and geologist. His main merit is the exploration of the Pyrenees, where some species of Ramonda are found. The type species of the genus is Ramonda pyreniaca and the intrafamilial position is: Didymocarpoid Gesneriaceae – “European genera” (Weber 2004)

There are three species;  Ramonda myconi (Reichenbach) is described as a species with an exceptional persistence despite drastic alterations in the environment. Flowers are produced from May to July and are hermaphroditic, self-compatible but not capable of autopollination and are mainly visited by bumblebees and syrphids. , Ramonda nathaliae (Pan. & Petr). and Ramonda serbica (Panc.). Geographic distribution is the Pyrenees and adjoining mountains in north-eastern Spain and the Balkan peninsula. The plants grow in rock crevices in shady and humid areas, at elevations of 50-2800 meters (165-9200 feet).

Weber, A. and Skog, L. The Genera of Gesneriaceae, 2nd edition 2007, http://www.genera-gesneriaceae.at/. 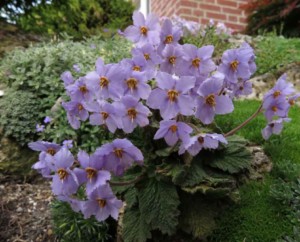