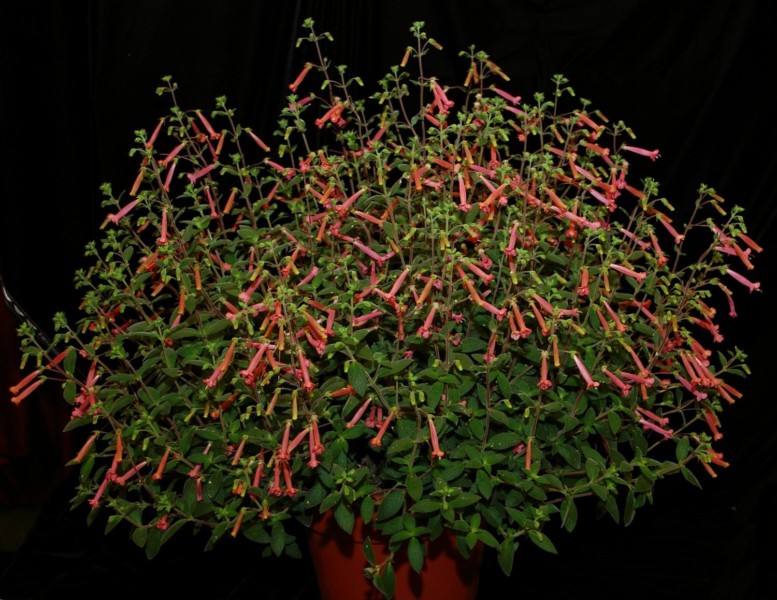 This spectacular plant was exhibited at the 2006 convention of the Gesneriad Society. S. ‘Apricot Bouquet’ is one of the more interesting and desirable of the larger-growing cultivars. It is a plant that is well-suited to outdoor culture in the summer, as it tolerates full sun very well, rewarding a diligent watering and fertilizing regime with hundreds of its warm apricot flowers, which are very attractive to hummingbirds. It grows well from cuttings taken early in the growing season. A closer view of the flowers can be seen here, another plant photographed in natural light here, and a show plant from the 2011 convention of the Gesneriad Society, grown indoors, here.

After a peak of flowering in mid summer, the plant gradually tapers off, with fewer flowers produced up until cold weather or even first frost. I then remove the tuber from the soil (it is quite large), and leave it with a coating of soil loose in a spare pot in my cool basement for the winter. When it starts to sprout in late winter I pot it up in a 12″ or 14″ pot, and put it in my bright east-facing window, where it will get some full sun. As soon as it is warm enough (which means no longer freezing at night), I put it outside where it grows rapidly.

By the end of summer, I usually have dozens of mature seed pods on the plant, a function as much of their profusion as of my lazy failure to groom. These seeds are viable, and will produce a variety of interesting progeny, some of which will be quite unlike S. ‘Apricot Bouquet’. The characteristics of all of this cultivar’s ancestry will be reflected in the seedlings — the small shrubby red-flowered S. aggregata ‘Pendulina’, with fragrant and sticky foliage; the large and sometimes ungainly S. tubiflora, with gloriously scented large white flowers; and the salmon-pink, sometimes yellowish, S. warmingii.