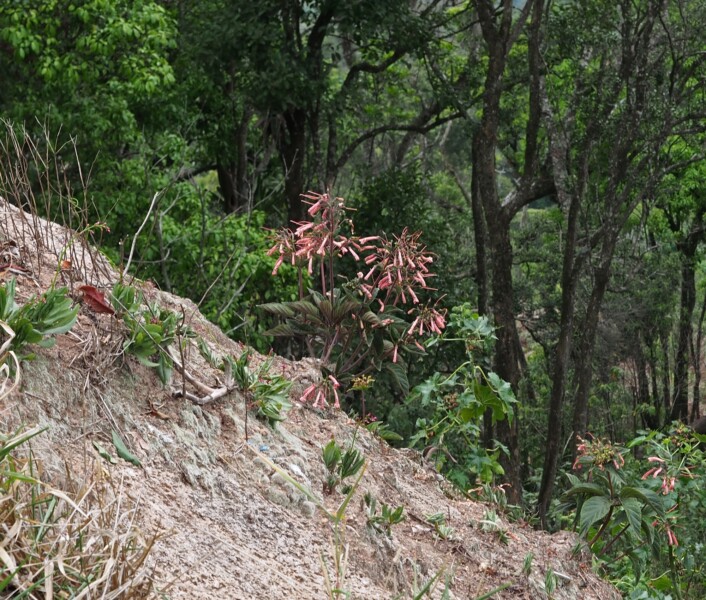 Sinningia douglasii was distributed for many years as S. verticillata.  The plants grown under that name had fairly muted pinkish flowers with darker markings, not unlike the plants featured in botanical publications from the mid-19th century. A good example is the print from Edwards’ Botanical Register in 1827, the first publication of the species. More recent collections sometimes have brighter colors and very prominent markings on the flowers.

The standard form of the plant has pinkish flowers with purple streaks on the inside of the flower tube (and to a lesser extent, on the outside).  There is usually one dark streak on each of the lower three corolla lobes.  The plant has two closely spaced whorls of three leaves each, giving the appearance of a single whorl of six leaves.  The underside of the leaf has a dark red midvein.

The feature photo above shows a large plant growing “in the wild” in Brazil, on an open rocky slope.

This species is one of the few sinningias found widely as an epiphyte, growing on the trunks and branches of trees.  In some places, it grows in the troughs of corrugated roofs.

This species has a dramatic flush of flowers in the spring.  For a few weeks, the plant puts on a dramatic display.  Then it is done for the year.

When resident on a tree, this species necessarily grows with its tuber fully exposed.  When growing in the ground the tuber will be only half buried.