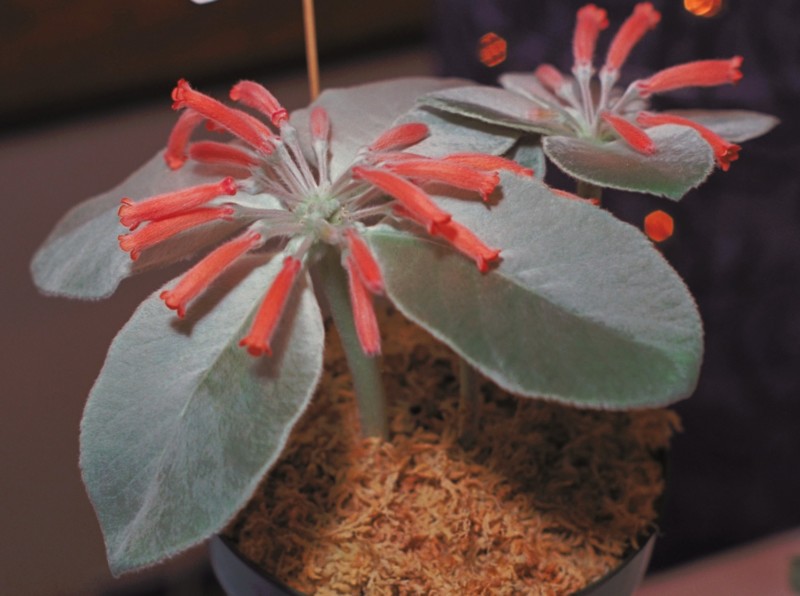 Sinningia leucotricha has had a confusing recent taxonomic history. Material in cultivation was known under this name for some time, before it was understood to be properly a different species, S. canescens. After some years under this name, the “true” S. canescens was determined to be a different but related plant, and the name S. leucotricha was reinstated for the species in cultivation at the time.

S. leucotricha is an attractive plant with leaves covered in fine silvery hairs which give them a metallic quality. While the silvery plush becomes less prominent on older leaves, they retain the metallic sheen throughout their lifespan and can be decorative for some months before entering dormancy. The orange flowers produced fairly early in the species’ annual life cycle display well against the silvery leaves, and a mature plant can make a very attractive horticultural subject.  The fine specimen featured above was shown at the 1997 national show of the AVSC, where it won “Best Other Gesneriad” (other than Saintpaulia, that is).

While the plant above has the tuber mainly under the surface of the soil, and further disguised by a layer of sphagnum moss, the species naturally produces tubers that are at least in part above ground. The exposed tuber, sometimes referred to as a caudex, can form part of an attractive presentation.