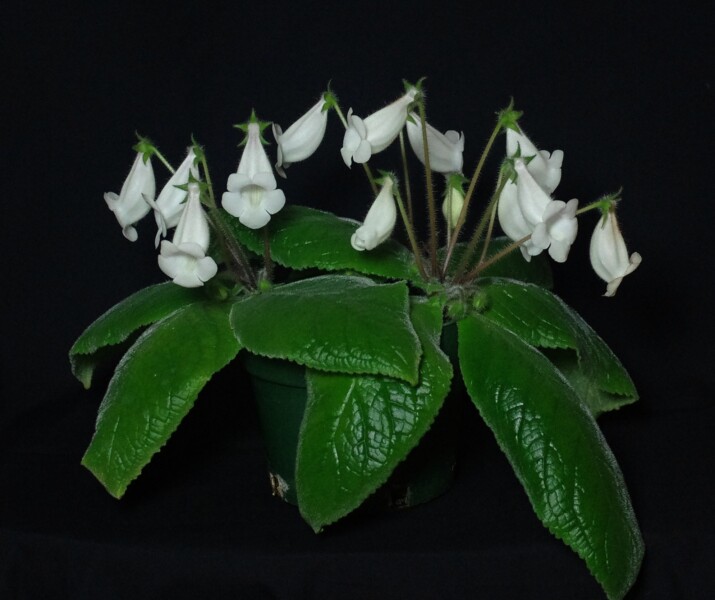 For many years Sinningia richii was known in cultivation and in herbaria from collections originally made in Mexico, far outside of the expected range for the genus. This “original” form was white with a few throat markings, and a flower and habit reminiscent of species like S. eumorpha and S. conspicua. When genetic analysis was done it turned out that it wasn’t closely related to either of these species, but rather was at the edge of the Corytholoma clade, which includes micro-miniature species like S. concinna and tall stemmed species like S. aggregata, among many widely variable others.

After that analysis was conducted additional collections were made in Brazil, adding new colors and somewhat different growth forms. A white collection from Espirito Santo State is very similar to the old Mexican form, and may be ancestral to it. Another white collection, also from Esperito Santo State from the vicinity of the town Jaguare, is illustrated above and is usually given the name S. richii Jaguaré.

A yellow collection from Espirito Santo State, is referred to as S. richii Robson Lopes after the person who discovered it, and a purple form sometimes called S. richii Itimaraju was found in Bahia State. As far as we know, none of these have been subject to molecular/genetic examination.

The purple-flowered form has a somewhat different growth and flowering habit than the others. It is indeterminate (the stems keep growing and adding leaf pairs) and the flowers are more obviously produced from leaf axils, rather than appearing as a cluster at the top of the plant.

It should be noted that all Sinningias do in fact produce flowers from leaf axils, but in some species (and some collections of S. richii) the top part of the stem and the top leaf pairs can be much reduced, and the flowers appear as a terminal cluster.

An excellent overview of this species can be seen on the website “Sinningia and Friends”.