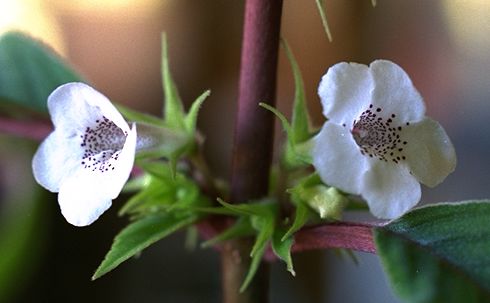 Sinningia schiffneri does not have a tuber.  In this, it resembles its relative, S. gerdtiana.  Both are shrubs.  S. schiffneri differs in growing tall (up to 100 cm or 3 feet) and branching mostly at or near the base — S. gerdtiana sprawls and branches freely along its stems.

S. schiffneri has white flowers with spotted corollas.  It blooms in summer and early autumn.  The more water it gets, the earlier it will bloom.

There have been multiple collections of this species, differing in leaf coloration and floral marking.  Some varieties have reddish leaf reverses.  As with S. reitzii (a very distant relative), the amount and pattern of the red depends on the light the plant receives.  Lower leaves seem to be darker than ones higher up the stem.

This page’s picture shows a collection distributed by the Smithsonian Institution.  It has dark leaves, with red markings on the backs, and red stems. The flowers are larger and more distinctly spotted than the previously available versions of the species.  A larger portion of this plant can be seen here.