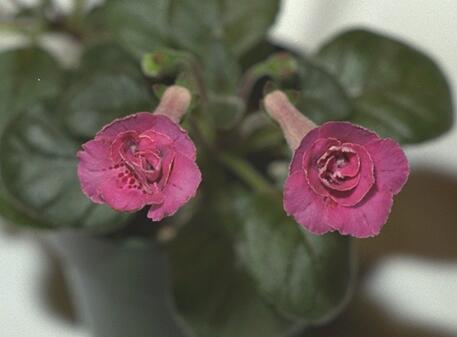 Treva McDaniel of Atlanta, Georgia, along with several members of the local gesneriad group, have worked diligently to capitalize on doubleness mutations in miniature sinningias. S. ‘Treva’s Treasure’ is one of the results of this work. The project is described in a series of articles from 1993 to 1996 by Treva and her colleague Bill Crews, in CrossWords, the newsletter of the Gesneriad Hybridizers’ Association. Achieving doubleness in the miniature sinningias is a significant event — double Saintpaulia hybrids (African Violets) were developed commercially in the mid 1950s (although some had been around for several years before then). Now, it is relatively rare to see a single African Violet hybrid.

Information about back issues of CrossWords, and membership in the GHA, may be obtained from editor Dale Martens.

A photo of the whole plant can be seen by clicking here.