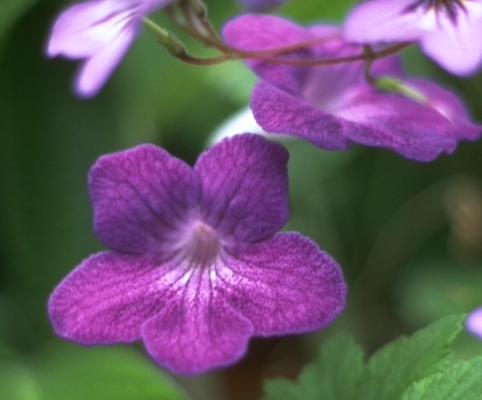 Various seedlings of S. formosus x S. ‘Elsi’ are illustrated on the site — those with more saturated colors have a tendency for the pigment to break up, producing a spotted effect in the flowers. In one of these, Streptocarpus hybrid (Rose) 6, the effect was particularly pronounced. Pollen from it was used on a white with a good flowers/peduncle count, derived from S. ‘Falling Stars’, in a bid to get floriferous and clearly spotted seedlings.

The plant shown here is clearly the best of the 10 that have flowered as of November, 1997. It exhibits fine spotting across the face of all lobes, both along and between vein lines, although the effect is not as clear in the photo as it is in person.