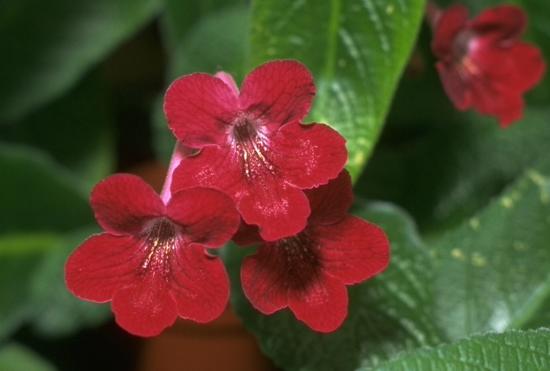 Chris Rose notes that this seedling is the nearest to a true red he has seen (RHS 187B, slightly more maroon than this representation). Parentage includes a seedling from a floriferous small-flowered cultivar (perhaps a white form of S. johannis) crossed with S. ‘Elsi’, which was in turn crossed with S. ‘Joanna’, a deep pinkish red from Dibley’s Nurseries.

This seedling has up to 11 flowers/peduncle, but most often only 2. It is also flawed in that the lower lobe lifts up too much on many flowers, and the leaves are rather large , up to 40 cm (16 in) long. It is being used extensively in breeding for a quality true red.