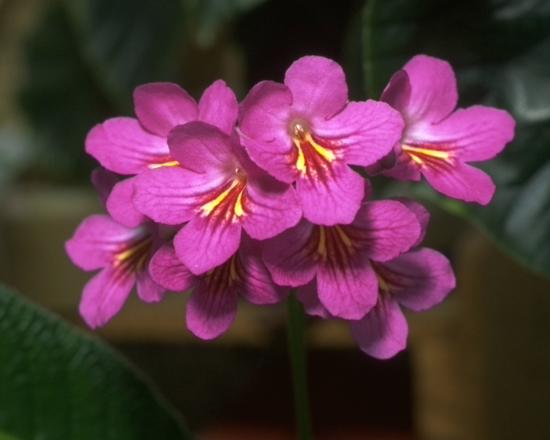 At one point, Chris Rose had an extensive Streptocarpus hybridizing program, which produced some beautiful plants. Unfortunately, most of these are no longer in cultivation, but it’s interesting to see what he accomplished.

S. ‘Ruby Anniversary’ is a complex hybrid involving a rexii hybrid, ‘Falling Stars’, ‘Ruby’ and ‘Elsi’. It is part of Chris Rose’s attempt to produce hybrids with larger areas of yellow on the flowers. The plant was named in honor of the 40th anniversary of the (U.K.) Saintpaulia and Houseplant Society in 1996. Although it has been informally distributed to a number of individuals, it has not had a commercial introduction.

An unnamed sibling plant with the same parentage may be seen by clicking here.