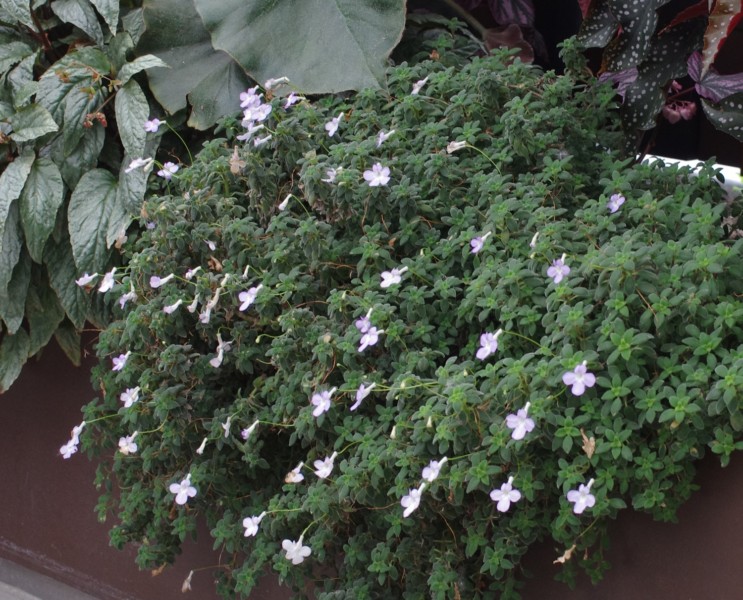 This species can work very well as both a feature plant in botanical gardens, and in a basket for home culture. Its semi-succulent leaves and pretty pale lavender flowers make it an attractive subject. The color of the flowers in photographs can vary, primarily because of the difficulty in properly capturing blues and purples with both film and digital cameras.

Material in cultivation as the true S. saxorum is notable for bearing leaves in whorls of three, rather than paired. The character is partly passed on to hybrids, where stems can have either leaf pairs or whorls. The flowers of the “true” saxorum are a nice pale lavender, with white throats and normally without throat or lobe markings. The form known as S. caulescens ‘Compact’ has the 3-leaf whorls, but has some pale markings on the lower lobe near the throat.

The true S. saxorum is not widely grown, although a hybrid created through a cross with S. stomandrus is. This hybrid known variously as S. ‘Good Hope’ and S. ‘Concord Blue’ (same cross by different hybridizers, indistinguishable) is a better horticultural subject than either parent. A white-flowered cultivar is likely a result of selfing and selection from this hybrid, although it is sometimes exhibited as a white form of S. saxorum and may be identical to the cultivar sold as S. ‘White Butterfly’ by Dibleys Nurseries in Wales.

Many online photographs published as S. saxorum are in fact the hybrid S. ‘Concord Blue’. Check the foliage and flowers, and if the leaves are not in whorls of three and the flowers have dark markings leading to the throat, it’s likely S.‘Concord Blue’ and not S. saxorum.

Other photos can be seen by clicking one of the links below: