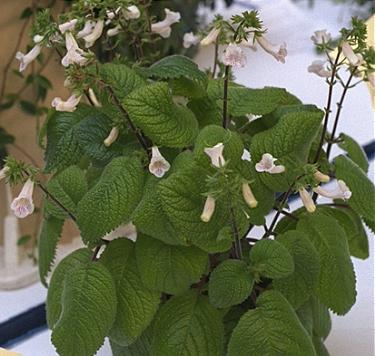 xGloxinistema ‘First Frost’ is the first hybrid involving the genera Gloxiniopsis and Diastema, and is a cross between Diastema racemiferum and Gloxiniopsis racemosa. It was produced by David Turley from a cross made in 1990, and first exhibited at the 1992 Convention of the AGGS, in Baltimore. The plant is an attractive shrub, with white flowers inherited from both parents. It is most easily propagated from rhizomes, although it is possible to root stem cuttings or individual leaves.

Prior to the recent reclassification of the broader Gloxinia group, this intergeneric hybrid was known as xGloxistema ‘First Frost’.

This was the plant first exhibited by the hybridizer David Turley at the AGGS Convention in 1992.