Codonanthe is a genus containing approximately 8 species found primarily in the montane and lowland forests of southeastern Brazil near the Atlantic Ocean.  Codonanthe species are epiphytes with a trailing growth habit.  They grow well in hanging baskets.  Their ease of culture, small size, and ease of bloom make them easier to grow then other epiphytic gesneriads like Nematanthus, Columnea, and Aeschynanthus.  However, their small, white blossoms are not as showy as the blossoms of those other genera.

The etymology of the name comes from the Greek kodon, which means “bell,” and anthe, which means “flower.”  The name refers to the bell-shaped (campanulate) form of the blossoms. 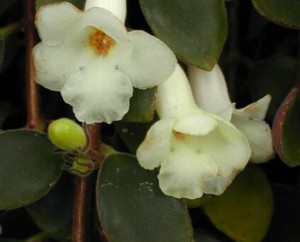