Codonanthopsis is a genus containing approximately 13 species found primarily in the Amazonian basin area of northern South America, in Central America, and in some islands in the Caribbean.  Codonanthopsis are epiphytes with a trailing growth habit.  They grow well in hanging baskets.  It is unclear why Codonanthopsis are not more popular in cultivation.

In the wild, Codonanthopsis has a close relationship with ants.  Ants use the fibrous roots from Codonanthopsis to support their ant mounds, and the ants feed from the nectaries found underneath the leaves.  In return, the ants distribute Codonanthopsis seed to other locations.

Codonanthopsis grow well in a well-drained soilless mix and under a 2-lamp fluorescent light shelf.  Higher humidity levels well over 50% would induce better flowering and fruit production.  Codonanthopsis can usually adapt to higher temperatures than Codonanthe. 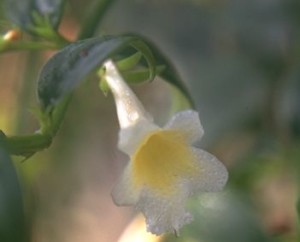