Paliavana is a genus of 6 shrubby species from southern Brazil that are very closely related to (and probably should be included within) Sinningia, but lack tubers. They are generally of easy culture but are not commonly cultivated as they can grow quite large. The large, attractive flowers are purple or greenish and usually fragrant (although sometimes unpleasantly so!).

In some ways, Paliavana is not a genus; rather, it’s a pollination syndrome.  Paliavanas are insect-pollinated or bat-pollinated tuberless sinningias.  The species which attract insects (presumably bees for most species) have similarities in the flowers that are not entirely due to genetic relationships.  The corollas are wide and bell-shaped (campanulate).

The exceptions are two (probably) bat-pollinated species, P. prasinata and P. plumerioides, which have the sturdy campanulate corollas and prominent markings characteristic of flowers visited by bats.

The species given the name Paliavana are distributed over three different genetic groupings in the sinningia alliance, as follows:

Paliavana species in the Sinningia group

A substantive  article on the Sinningia Alliance addresses Paliavana, as well as Sinningia and Vanhouttea, and provides additional information on the taxonomy, distribution and other characteristics of the group. 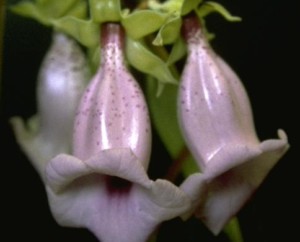