Primulina was once a minor genus with a single species, P. tabacum.  This is a small soft-leaved plant with interesting and attractive flowers, with leaves that many people thought smelled of cured tobacco.

Then botanists investigated the genus Chirita, which had long been known to need revision and discovered that many of the Chirita species appeared to be closely allied to P. tabacum and should be in the same genus.  Since the “Primulina” name had publication priority, it meant that all those allied species had their names changed to Primulina. The rest were changed to Microchirita, Henckelia or other names.

There are now upwards of 100 species within Primulina.

Even though it is the largest of the ex-Chirita genera, Primulina is not the most widespread, being found only in the limestone areas of western and southern China and northern Vietnam. Guangxi province is particularly rich in species with about half of all known species. All species are perennial herbs and many have rather leathery patterned leaves and/or attractive flowers making them ideal for cultivation. Over 30 species are currently known in cultivation, and many hybrids are available in cultivation and in commerce. 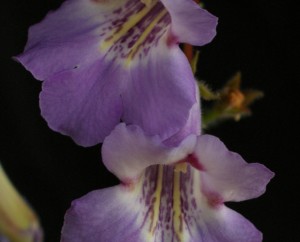