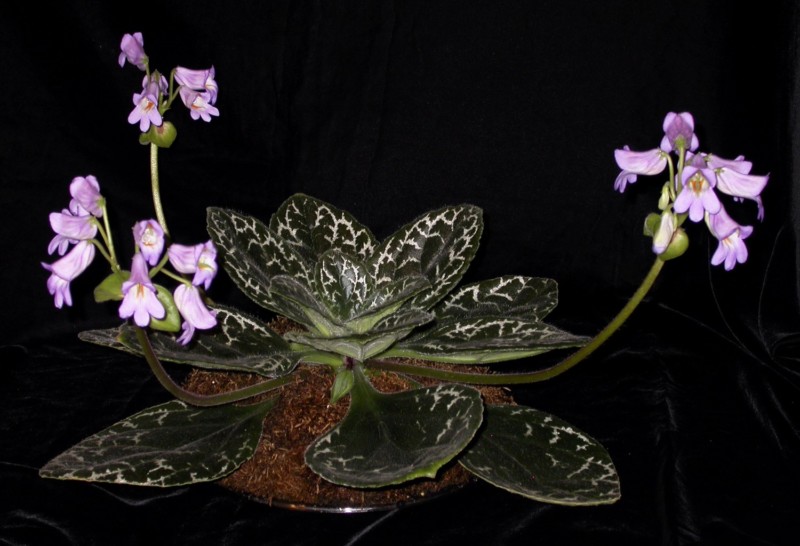 Often grown and exhibited as just Primulina ‘Naine Argente’, the cultivar is clearly a member of the P. dryas group and is shown as such here. It has had a somewhat tortured naming history.

After discussions among a number of individuals with apparently excellent long term memories, we understand the situation to be as follows.

A plant of this cultivar was exhibited a number of years ago at a Montreal-area convention of the African Violet Society of Canada. Someone translated its English name into French and wrote this on a label. The plant was taken up by Lyndon Lyon Greenhouses in the US, and the label name was transcribed as ‘Naine Argente’. Our professional translator resources tell us that this roughly translates as “silvery dwarf”, although it’s not really in proper French form. One irony is that the plant is anything but dwarf, often growing to substantial size.

It does bear some similarities to other P. dryas selections, such as P. dryas ‘Latifolia Dwarf’, which is also capable of growing to a good size despite its name.

The plant featured above was exhibited at the 2014 convention of the Gesneriad Society. A close photo of a flower cluster illustrates the beauty of the cultivar, as do photos of the side and front of a flower. The flower stems of ‘Naine Argente’ have a curious way of developing, and exhibit a kind of spiral habit, as here, before adopting a more conventional look. A nice young plant, not in flower, was exhibited at the Gesneriad Society’s 2018 show, and beautifully illustrates the distinctive silver patterning on the leaves.