Gesneria is a member of the subtribe Gesneriinae, a monophyletic lineage that has diversified in the Caribbean. Gesneria is the only genus of Gesneriaceae that is entirely endemic (restricted) to the Caribbean. It includes 65+ species and is the basis of the type genus (Gesneria humilis) for the family.

Most Gesneria species are stout shrubs (ca., 1-2 m tall) with alternate leaves and tubular to campanulate red flowers. An exception to the shrub-habit includes several species with reduced woody stems and leaves in a basal rosette. Examples include Gesneria reticulata (from Puerto Rico, Cuba, and Haiti) and G. depressa (from Cuba). Additional habits include species that are obligate lithophytes (=plants that grow on rocks), especially on limestone outcrops in coastal regions. Examples of obligate lithophytes include Gesneria salicifolia and G. glandulosa from eastern Cuba.

The characters that unite all species of Gesneria are glabrous (= without hairs) filaments that are free from the corolla tube (i.e., no adnation). This combination of characters differentiates Gesneria from the closely related genus Rhytidophyllum. In Rhytidophylluym, the filaments are adnate (= fused) to the base of the corolla tube for 3-5 mm, and the lower region of the filaments are covered in dense pubescence.

Gesneria is widely grown as a horticultural subject. Many species are adaptable to indoor conditions, and are frequently seen in flower shows. Hybrids have been made between species, as well as intergeneric hybrids with Rhytidophyllum. 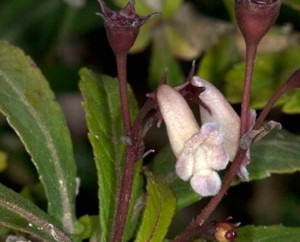