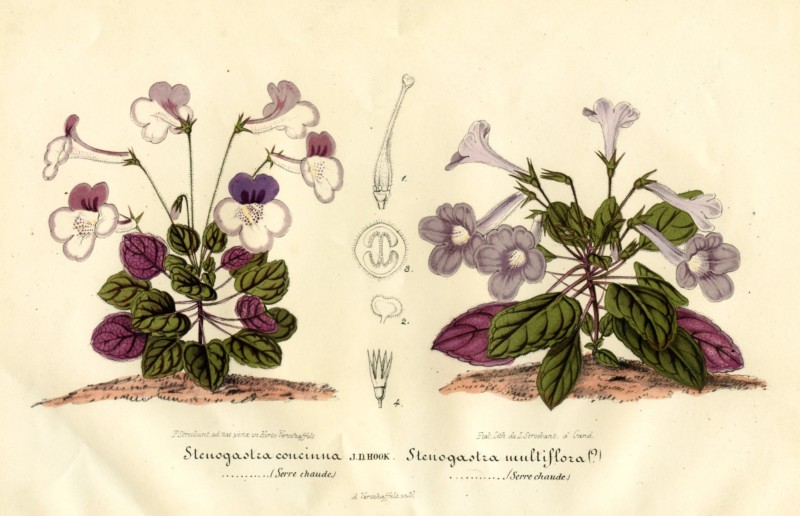 This print is an early representation of Sinningia concinna, one of the beautiful tiny micro-miniature Sinningias.  It was first published three years before, in Curtis’s Botanical Magazine.

The other plant in the print, Stenogastra multiflora, is described in the text associated with the image as a hybrid of Stenogastra concinna and Mandirola lanata. This cannot be correct, as the latter species is actually a Eucodonia, not at all closely related to the Sinningia group.

Elsewhere, in The Gardener’s Weekly Magazine and Floricultural Cabinet (1863), Stenogastra multiflora is described as a hybrid of Stenogastra concinna and Gloxinia hirsuta. The latter is now known as Sinningia hirsuta, and has indeed been crossed with the micro-miniature Sinningias. In fact, it was once known as Stenogastra hirsuta. It is likely that this is the correct attribution for what we see here, although the plant seems less hairy than one might expect, and the flower color and pattern is quite different than the modern version of the same cross.

Gloxinia hirsuta was in fact once known as a Mandirola, specifically Mandirola multiflora, and this is undoubtedly the source of the confusion.