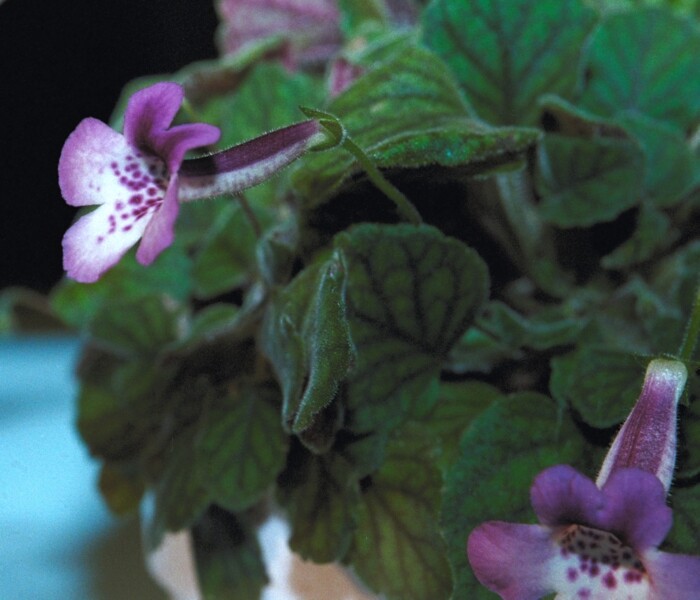 Sinningia concinna is one of the “micro” species of Sinningia.   A plant may have one or more crowns, but each crown is usually less that 5 cm [2 inches] in diameter.  The species is prized for its beautifully spotted flowers and nicely marked foliage.  It was the second micro species to be published, the first being S. pusilla.  Three more micro species have since been introduced into cultivation: S. muscicola, S. kautskyi and S. minima.

S. concinna is similar in size and general form to S. pusilla, although it has a rosier color and (usually) decorative purple spots. Flowers vary somewhat in the spotting pattern and in the degree of purple/lavender on the lower corolla lobes. This variation seems primarily to be due to cultural conditions, as most plants in cultivation are clones.

Unlike S. pusilla, S. concinna does not set seed easily, and is generally more difficult to grow well. It requires relatively high humidity (50% or more).  People with dry growing environments can use terrarium conditions, but growers with the 50% or more in their homes can grow it unenclosed in natural light.

It is the parent of many hybrids, including S. ‘Cindy’, one of the first of the widely grown miniature sinningias, and has contributed its delicate form and spotted throat to a remarkable number of other hybrids.  The hybrid of S. concinna with S. pusilla, S. ‘Wood Nymph’, is very popular, as is S. ‘Bright Eyes’, the backcross of ‘Wood Nymph’ to pusilla.  An unlikely cross is the hybrid with S. sellovii, Dave Zaitlin’s S. ‘Deep Purple Dreaming’.

A new collection of S. concinna has recently been reported, usually with the collection location attached to the name. “Seropédica” is a municipality in Rio de Janeiro State, Brazil, and is where this new collection was found. S. concinna “Seropédica” is similar in foliage to the standard form of the species, but flowers have few if any spots and are usually substantially larger than in the standard form. There is some variability in the plants distributed under this name, likely indicating significant diversity in the population from which it was collected.

Additional photos of S. concinna can be seen in a slideshow by clicking one of the following links: