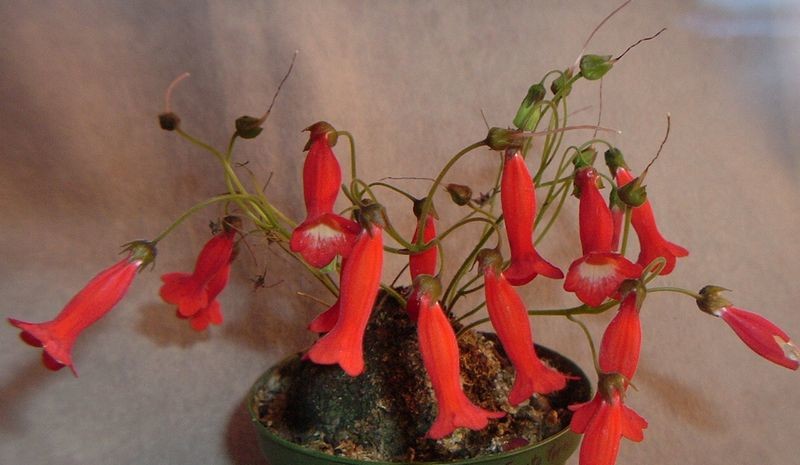 This species was collected near the town of Santa Teresa in Brazil. The plants were growing from mossy cracks in a large boulder, not far from a waterfall. As can be seen from the photo taken in nature, the leaves hang down in a fashion reminiscent of several other unrelated species, such as Streptocarpus haygarthii in South Africa.

S. helioana flowers directly from the tuber in the absence of leaves, as do two other published species, S. defoliata and S. tuberosa, and an unpublished one, S. sp. “Pancas”.  Recent research reported by Dr. Alain Chautems of the Geneva Botanical Garden shows that S. tuberosa is not closely related to the other three, being in the Sinningia group, while the other three (including S. helioana) are in the Corytholoma group.

S. helioana and S. sp. “Pancas” are in a cluster with S. aghensis and the miniature species S. pusilla, S. concinna and S. muscicola.  S. defoliata appears more closely related to other members of the Corytholoma group.

As can be seen from the photo of tubers and leaves in a pot, what emerges from the tuber is is not a petiole (leaf stalk) but a true stem; each of the stems produces two leaves, one of which is greatly reduced and generally becomes deciduous. The photo shows one intact leaf pair, as well as a number of leaves where the smaller leaf is absent.

As can be seen clearly from the photo of the seed pods, the inflorescence (flowering structure) follows the classic pattern in the Gesneriaceae of a pair-flowered cyme.